This coming Sunday, May 4th will be Annie's 9th Birthday. We think back to the first few days we knew her at the shelter. Once the initial trauma wore off, she transformed from the little girl who would throw herself into our arms to a little six year old with a big smile and contagious laugh. 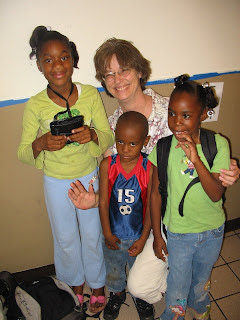 It is hard to believe that two years have passed since her 7th birthday, the birthday that her mom spent drunk on the driveway with her friends, and the day before mom and the kids left for New Orleans.

The picture at the right was taken at the bus station the day they left, May 5, 2006. How little they are!


Many times we have wondered what happened to the kids while they were in New Orleans, the boys for 2 weeks and the girls for a month.

Shortly after the girls returned to San Antonio, Annie began wetting the bed, she was always the last one to go to sleep, and as time went on, she would cry inconsolably at bedtime.

After much prodding, she admitted that everything was scary at night. The curtain swags "smiled" at her, the TV in the living room cast moving shadows, the cars driving down the street made shadows on the wall, the voices of the neighbors scared her, she saw faces in her room, and she diligently made sure that all blinds were closed tightly and the doors were all locked.

No amount of talking, reassuring or coaxing would convince her that she was safe. The tears still streamed down her face. She tried sleeping in her own bed on the top bunk, but soon moved down to sleep with Marquel. This did not help calm her fears.

In desperation we asked her therapist to help us out. She referred us to a Psychiatrist, who prescribed medications to help her with the anxiety. He explained that when the brain is so thoroughly traumatized, it interprets everything as being evil or scary. After several months on medication, Annie has improved greatly. While she still checks the blinds and doors, she can sleep in her own bed without crying herself to sleep.

At times Annie will get a distant stare in her eyes. If I don't hear her voice in the house, I look out the window to see her on the swing set. This seems to be her escape to quiet time by herself. Sometimes she just swings and swings, and sometimes she sings to herself as she swings. I wonder what is going through her mind.

Annie is an amazingly smart little girl. She has ability to think deeply, thinking through problems and reasoning out solutions. She is quite determined that she is going to be a doctor when she grows up, and with her straight A's, she certainly could be anything she wants to be.

Most of the time she has a big smile on her face. She has a way of "flying under the radar" when the others get in trouble for various rule infractions. She loves to sing and has built in rythm. She is our little drama queen, her enthusiasm makes us smile. She has a special sparkle in her eyes and the most contagious laugh.

In addition to the flood, the horrible sights and sounds, the evacuation and the shelters, and a mom who went off the deep end, we have no idea what further traumas Annie witnessed or was subjected to, and we may never know. When we picked up the girls in New Orleans, she and Marquel came running out as fast as their little legs would carry them. Annie threw herself into my arms and held on for dear life.

While she does not want to go live with her mom, she misses her. Or I should say, she wants her mom to be loving, caring and nurturing. While no one can ever replace her mom, I see her face light up when she sees Janet, Mary Ann, Mardi, Teresa or Mary and many other friends who show the girls special attention. Through their love as "surrogate mom's" the girls can learn how a "real mom" shows love and affection. 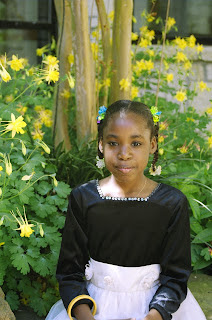 Randy and I cannot thank you enough for your part in nurturing "our kids".

Picture of Annie was taken
April 6, 2008 in the Peace Garden at
St. John Lutheran Church.
Posted by Stephanie at 6:47 PM No comments: 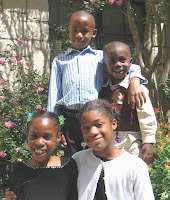 "You are now superglued. No refunds, no returns". This was the judges verdict!

What a relief to Roosevelt to have full legal custody of the kids. A huge thanks to Atty. Judith Wemmert for her perfect execution, and the judge, Hon. Martha Tanner, who made the proceeding relaxed with her great sense of humor. Charlie made instant friends with the Baliff, (he wishes to remain anonymous so that no one knows he has a softer side!)

To Pastor Schulte, thank you so much for taking time from your busy schedule to attend the hearing and for your meaningful remarks showing the dedication and support that St. John Lutheran Church has made to Roosevelt and the kids.

Thank you to all who came to show their support. As we all gathered around the judges bench, it was so comforting to know that we have so much love, compassion and dedication behind us.

We want each and every one of you to know how much we appreciate every thing you do, every kind word and gesture, all the prayers and good wishes.

A special thanks to Sharon Tschirhart for always having her camera handy. Click here to watch the video (scroll down on page).
Posted by Stephanie at 5:47 PM No comments: