It has been six years since Hurricane Katrina.

Last week Mr. Thornton received a letter from FEMA stating that they had "overpaid" him in the amount of $2,000.00!  No explanation, no proof of any kind, simply a request for him to pay it back.

Since we helped Mr. Thornton through the mountains of confusing paperwork, we know exactly what he had received.  Are they referring to the $2,000.00 initial payment given to citizens following their evacuation from affected areas?  Now they want it back???  They didn't tell him it was a loan!

After all he went through with FEMA, filling out stacks of forms to discover weeks later that they were lost, being denied benefits, and reapplying, this all seems just a bit incredulous.

So we will write a letter of appeal and point out a few facts:

He lost all his 68 years of accumulated possessions (much of which was stolen when he was denied access to his home in New Orleans).

He lost his source of income.

Unable to return to his damaged home, he now has to pay twice the price in rent without his grown children who lived with him to contribute to household costs.

He lost his wife to her alcoholism, and she abandoned 4 small children with him.

A serious injury forced him to accept Social Security Disability, but ironically, that denies him the right of having any income, even for a job that he could physically do.

So we helped him write the Appeal letter, explained that Mr. Thornton accepted what they gave him, did not attempt in any way to defraud them, and hope they drop it!

Will the trauma never end?

It has been a busy and eventful summer.  The kids have been ready to go back to school for about a month!

Charlie finally got to go to camp.  He went to TBarM Camp in New Braunfels, a Christian day camp.  He enjoyed it thoroughly and made friends with a boy who was adopted from the Ukraine.  We found it  fascinating that he chose a boy with a similar background to his own.

Chip was able to spend about half the summer with us.  He LOVED his swimming lessons!  Thank you to the sponsors of the swimming lessons, they were thoroughly enjoyed and appreciated.  These lessons have been high on our priority list each year as it not only gives them a life skill, hopefully it helped them overcome their fear of water and floods.

Marquel was able to go to church camp thanks to the great people at St. John Lutheran Church.  From what we hear it was a meaningful experience for her.  She has spent time with her new Big Sister from the Big Sister/Big Brother program.  Her Big Sister asked coworkers to donate school supplies for the kids and was very proud to bring the kids everything that they needed.

We have Annie signed up for a Big Sister as well.  Hopefully this will give the girls a friend that they can look up to and talk to.  We are working to get Annie tested and qualified for some extra help at school.  Her early childhood has left her stuck at about a 6 year old emotional state.  This results in difficulty with her school work as she is still learning like a 6 year old and we fear that 6th grade work will be unmanageable for her as we have seen her grades decline over the past few years.  Please pray that we can get her the help she needs.

Charlie is back at football, and loving it.  We can see how much improvement he has made in a year's time.  He has progressed from not eating at all to eating TWO fruits and TWO vegetables every day!  This summer he has learned to eat 3 full meals a day and sometimes even 4.  He still makes funny faces when he has to chew his fruits and vegetables, but he at least gets them down.  Regular early bedtime, better nutrition and a better state of mind has made a big difference for him.

They are always excited for school to get started, and they LOVE getting their new shoes.  We find that good quality shoes might be a little more expensive but they last several times as long as the cheaper ones. 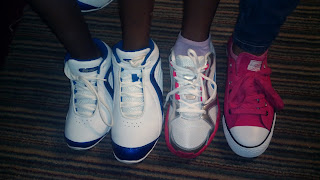 A big huge Thank You for all who helped the kids have a great summer, new school shoes and uniforms, and experiences that they will not forget.

Throughout the summer we have had some big ups and downs.  Once again we learned how much it means to us to have the love and support of all of you.

Until next time. . .
Stephanie

Be sure to check out our Sister Blog which is a little more "anonymous"
Posted by Stephanie at 2:02 PM No comments:

Due to the fact that "Our Kids" are getting older, I felt that it would be good to start a "sister blog" that will allow discussion without violating the privacy of the kids.

I will not send an email when there is a new post ~ please use the "Follow by Email" link if you are interested in receiving an email each time a new post is added.  The new blog is  "Our Kids" by Choice

My hope is that in a more anonymous way you will be able to learn more about the issues that come with kids who have been abused and neglected.

I will continue to post on this blog also, and because my email list is getting so long, I encourage you to use the "Follow by Email" on this blog as well.

Events of the last weeks have shown us once again that the love and support you all show to us is so valuable.  We could not do this without all of you!

Until next time . . .
Stephanie
Posted by Stephanie at 7:22 AM No comments: