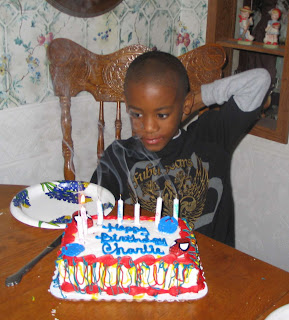 Charlie's birthday is January 15th - he is now 7 years old.

It is hard to imagine that Charlie was only 3 1/2 years old when we met him (that is how old Chip is now)!

The last 3 years have been a challenge Charlie. When we met him at the shelter he would run and run, as fast as his little legs would go. After a few days he started talking and his clarity and wisdom was amazing for a little tyke.

After a year of counseling we decided his ADHD would be better controlled with medication, and we embarked on a year of trial and error. We now think he is doing well, much more capable of controlling his behaviour.

Learning about ADHD has been quite a journey, and we know there will be much more to learn. Some of the lessons have been hard, such as understanding that without the medication he truly cannot control himself and no amount of punishment will change the behaviour.

With the medication his face and body relax, allowing him to make choices and learn. It allows his teacher to teach class without the constant interruptions of Charlie throwing pencils or erasers and then scrambling around the room to find them, or clapping his hands for 15 minutes straight and then banging his head on his desk, or yelling out the answers before other students have a chance.

It is easier for him to speak in a normal voice rather than screaming at the top of his lungs. The medication allows him to have feelings; crying when he is sad, or just being quiet when he is in a melancholy mood. He is learning that he cannot always be the "boss", that he must listen, learn and obey.

The decision to put him on mind altering drugs was a difficult one, but we want to give him the best chance to succeed in life because we know that this is something he will live with for the rest of his life. He is reading above his 1st grade level and constantly surprises us with his knowledge.

We are so thankful for the patient teachers, the gifted counselors, and all those who love Charlie so much. Here again we think of where Charlie might be if he was in New Orleans. Through your support, we are all working together to give Charlie the life he deserves.

Happy Birthday, Charlie. We are so honored to get to spend it with you!

Randy and Stephanie
Posted by Stephanie at 8:39 AM 3 comments:

What it means to be poor - Survey Results

To the left is a Quick Survey. These survey questions are meant to give you something to think about. From time to time I will change the survey question and post the final results of the previous survey.

"Poverty" is one of those words we really don't want to think about or talk about too much. If we don't know about it, we can ignore that it exists, or complain about people on "welfare". Over the last few years we have learned far more than we ever thought we would want to know about poverty.

$21,200 would be a job that pays $10 per hour/40 hrs per week, which means a full time job can leave you living at poverty level. It most likely does not provide health insurance, or if it does, it is going to take more of your check than you can afford. Many people would feel very lucky indeed to find a $10/hr job!

Now consider that many people have far less to live on. How would you support your 4 kids if your total income was $9,600 per year, and the government said you cannot have a job, and no one in your household can have a job. Rules such as this do not allow people to escape their plight.

Think about it carefully - could you support your family on this income? Or do you say to yourself, "There for for the grace of God go I"?

Is my success due to my own hard work, or is it a combination of my good fortune to have middle class parents who were smart and well educated, who encouraged and guided me, gave me a secure home with nutritious food and the benefit of good schools and solid values so that I could use my brains to pull it all together? What if I had none of these things? Where would I be?

The Poverty Threshold is determined by the census bureau results as a guide to states in determining the eligibility of certain benefits such as food stamps or Medicaid.

I ran across a blog that has a very poignant list of what it means to be poor. I encourage you to read it! http://whatever.scalzi.com/2005/09/03/being-poor/ Judging from the 450 comments left on this blog, I think it certainly hit a chord with many people.

There are some things on this list that remind us of what "our kids" can identify with, and other things that we don't necessarily think of, such as being humiliated to say "I get free lunch" in front of all your classmates.

Thanks to Mr. Thornton and to so many of you, "our kids" have been able to benefit from good, wholesome food, security of a home and bed to sleep in, plenty of clothes and even some fun, "cool" toys. Being able to go to school in clean, well-fitting clothes and shoes gives them a boost before they even walk out the door each morning.

I have a new Survey question - be sure to vote!

Until next time ~
Stephanie
Posted by Stephanie at 9:19 AM No comments:

Another Christmas is over and another New Year has begun. The older we get, the faster times flies by.

We picked up the kids on Friday, December 19th, dropped their dad off at the bus station and headed for Nebraska. What a great Christmas the kids had, thanks to so many of you. It was a much easier trip this year, as the kids are a year older, more mature and more calm. Click here to see pictures!

Mr. Thornton was able to get some rest and relaxation while he visited family in New Orleans and fished to his heart's content. His peaceful time was disrupted the day after Christmas when his nephew was killed in a robbery attempt as he walked the few blocks to the neighborhood store. What a sad saga real life in New Orleans continues to be for so many.

Over the next few months we will be busy helping the girls study for their TAKS tests (Texas achievement tests). They both lag a little behind in Math, but their reading skills have improved, which is helpful to their Math word problems. They keep their good attitudes about school, for which we are thankful. 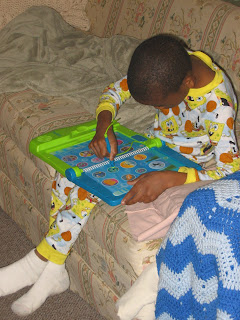 Charlie is reading above his 1st grade level, so our challenge is to keep him challenged. Over the holidays we discovered that he loves puzzles and will work for hours on Lego projects or transforming his Transformers. We have learned that his ADHD allows him to concentrate for long periods of time on these things, so we will find more projects like this for him.

The used LeapPad that I found for him proved a big hit! (picture at right).

Chip follows Charlie everywhere, wanting to do what Charlie is doing. He is growing fast and is beginning to wear clothes that Charlie wore when they first came to Texas.

Tomorrow we will be meeting with a lawyer to finalize a will for Mr. Thornton. He is requesting that Randy and I become legal guardians of the kids if anything should happen to him. We all feel a sense of relief that this will finally be in writing. Thank you Jim and Janet for helping us get this accomplished!

Marquel has expressed an interest in seeing her mom again, even though none of the kids have any desire to live with her. We will always keep in mind that they do have a mother, and no one will ever take that away from them. Some day they will have the maturity to understand why she is not able to care for them.

We thank all of you for your love, encouragement and support over the past year.

Stephanie, Randy, Turk and "our kids"
Posted by Stephanie at 10:15 AM No comments: