Only two months of school left! This year Annie has struggled with Math. We have worked on math every weekend and her teacher has given her extra tutoring after school, even driving her home! Now that is really going the extra mile. 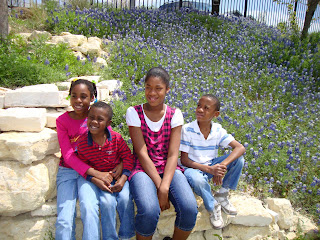 Keep your fingers crossed and say a prayer that Annie will pass her Math TAKS test the last week of April. She needs to pass this test in order to go to 5th grade next fall.

With summer approaching we are making plans already. Annie and Marquel will go to Camp Chrysalis again. They will be going on scholarship, for which we are really grateful. It is the highlight of their summer and they sing the songs and tell the stories they heard all year long. This experience with other Christian kids and counselors is invaluable to them.

Charlie will be spending a week or two with Randy’s sister, Miss Debbie. He is not yet mature enough to go to Camp Chrysalis.

Last summer we signed all four of the kids up for swimming lessons. They love to be in the water, and we felt they should at least know the basics of swimming. It was a huge hit. Annie has decided she wants to be on the Olympic team some day. They would all like to learn more about swimming this summer.

Charlie would like to be on a sport team. The next registration will be for football. It would be an excellent experience for him to learn a sport along with good sportsmanship and social skills.

The cost of swimming lessons is $50 per child. Football registration costs $170 for regular or $100 for flag, plus the cost of shoes and the transportation to games.

If you would like to sponsor or help sponsor one of the kids sports, please let me know. You may make a tax deductible donation to the Thornton Family Fund (click on the link and scroll down to Cash Donations to St. John Lutheran Church).

As always, your continued support is so very much appreciated!

Until next time. . .
Stephanie
Posted by Stephanie at 12:05 PM No comments:

A Boy and his Balloons

Charlie has been with us 6 weeks now. He seems to be settling into his new routine.

With fewer pouting episodes we are getting more school work done. We spend a lot of time on reading, reading comprehension and spelling, things he had fallen behind on.

I picture a little boy holding on tightly to a big bunch of helium filled balloons. He is desperately trying to keep control of these balloons, as they represent all the different aspects of his life. 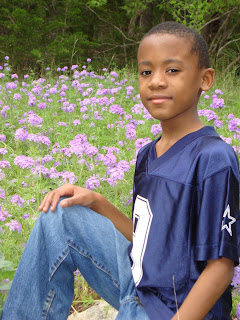 He has given in to the constant struggle over eating. He now eats three meals a day with no fuss – he even offered to eat green beans today! We have started a chart to keep track of his weight, he gained 2 pounds last week. He is drinking more water and we can tell he feels much better. A balloon is let go.
He doesn’t make a fuss over bedtime. Now he wants to get his shower done so he can get to bed and listen to a chapter of “Pinocchio’s Quest”. Another battle we don’t have to fight and another balloon released.
We play a little game to go to sleep. He has to close his eyes (and his mouth!) and pretend that he is on a cloud. The cloud is soft and warm and helps him feel safe so he can go to sleep. Now he is asleep in minutes, he doesn’t get up numerous times to make sure we haven’t gone off and left him alone. Another balloon released.
The first few weeks he was easily bored and didn’t know what to do without his brother and sister to play with. Now we enjoy watching him play and entertain himself which is good for his imagination and his self confidence. He can easily spend an hour or even two outside playing without coming to check on us every few minutes. Two balloons released.
Letting me be in control of school time has been a big challenge. When he can’t do it his way in his time, he gets very upset. Slowly he has let go of more balloons and school time goes much easier for both of us.
When he feels like he is losing control he fights hard to keep it. During these times his “punishment” is to sit on my lap. While he kicks and struggles, he never struggles to get away. When he gives in, the “good attitude spider” tickles him until he can’t help but get the good attitude back. Then we often sit and talk. He is learning to verbalize about his thoughts and feelings, each time releasing more balloons as he unburdens himself of bad memories or worries. These can be very enlightening moments. More balloons released.

The balloons have to be released when he is ready and willing.  Only then can he really let go of the burden he is carrying.
Thank you all so much for your thoughts, prayers and encouraging emails. We appreciate it more than you know and we love to hear from you.
Until next time . . .
Stephanie
Posted by Stephanie at 6:15 PM 2 comments:

Week #2 of Charlie living with us was also Spring Break for the other kids. Since Randy had to be out of town a couple of days and I had to work, we decided to let Charlie spend some time at his father's house so he could play with his sisters and brother. We wondered if this would be beneficial to him, or a setback in his behavior.

Thursday morning I had to go take Chip and Charlie to their dentist appointment. Mr. Thornton was anxious to go do something with his friends and when I offered to take all the kids home with me, he jumped at the chance.

When we made this decision we knew that there were the other kids to think about. How would they feel about Charlie living with us and how would they react. Marquel seemed quite happy to have this burden off her shoulders. She had been held responsible for keeping Charlie under control, which of course she could not do. Annie was quite jealous and said she was bored at home. This did not surprise me, but I hoped that it would give Annie a chance to mature also. Annie is very dependent on Marquel as a mom and Charlie as a “partner in crime” when the hyperactivity takes over.

Thursday on the way home we stopped at our school in Bulverde to register Charlie for the fall, as it was the last day for registration. All the kids sat quietly in the office as we completed the paper work. A lady breezed into the office and on her way out she said, “I guess these are new students”. Her tone was not particularly friendly or welcoming, and she did not wait for a response as she exited the office.

Charlie enjoyed the weekend playing with his sisters and brother. There was no fussing when we took the others home on Sunday night. We wondered what the next week would bring.

Week #3
Monday Charlie cheerfully ate his breakfast and got busy with his school work. He was happy and cooperative. I had this week off from work, so it was nice to be able to spend the whole day with him. In the afternoon he helped Randy fix the tail light on the jeep and he was thrilled. It was a good day and I dared to think that this could continue.

The rest of the week did not go as well. When Charlie got frustrated because he had to do his school work my way and not his, he would throw his pencil and pout. I moved anything in his reach out of the way and let him sit and “think” until he got his good attitude back. It was an opportunity for me to get some house cleaning done!

At times he needed to curl up on my lap for a while. Then the “good attitude spider” comes out to tickle him until he gets his smile back. At one point he made plans on what he wanted to play with Annie the coming weekend, “If I don’t have to spend time sitting at the table.” I reminded him that he was the one in charge of acting right so he didn’t have to spend time “thinking”.

Bedtime is hard. His medication has worn off and hyperactivity has returned. He doesn’t want to go to sleep. He is convinced he doesn’t sleep at all most nights, and he doesn’t want to be alone. We have set up a very strict routine for bath time and bed time. He tries lots of different delay tactics, but he really doesn’t fuss too much about going to bed. We have a special Biblically based edition of Pinocchio, and we can read a chapter each night if he gets into bed on time. He really enjoys this time. Then we play a little game where he closes his eyes and imagines himself floating on a cloud and falling asleep. Within minutes he is sleeping.

Sunday night when we took the other kids home, Charlie wanted to stay and play. For the first time there were a few tears as we got into the car to leave their house. I got into the back seat and held him as we talked about why he was living with us. We don’t have to say a lot, he is smart enough to read between the lines and figure it out. In a few minutes he was fine and called his Father to tell him he wasn’t crying any more.

In some ways this was much harder than I expected, and yet in many ways he was doing better than I anticipated he would.  We wondered how long it would take for him to settle into this new routine.

Until next time . . .
Stephanie

Link to "Pinocchio's Quest" book on amazon.com
Posted by Stephanie at 5:31 AM No comments: