What a fun Christmas the kids had! 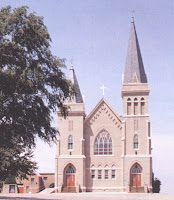 We left Friday evening, December 18th.  By the time one movie ended, the kids were asleep.

Saturday morning we arrived in Beatrice, Nebraska.  Randy's sister and husband met us there later in the day.  They wanted to go their home church on Sunday.  While we waited for Deb and Bryce to arrive, Randy drove out to the home place, past his church and stopped at the cemetery to say Merry Christmas to his dad. 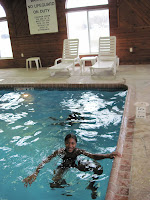 When Randy got back in the car Chip asked Randy, "Did you find him?"  What a sweetie!

At the hotel the kids were elated to find that they could go swimming in an indoor pool even though it was snowing outside!

After church on Sunday we spent some time with Randy's Aunt Grace and his cousins, Joan and Diane and Jr.  What fun they had playing games and doing puzzles.  I think they are beginning to understand family relations and how special they can be. 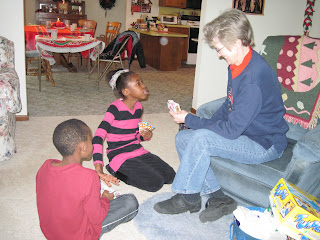 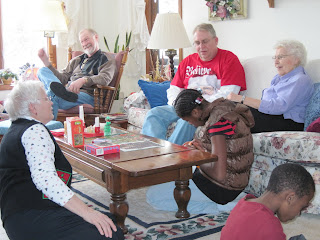 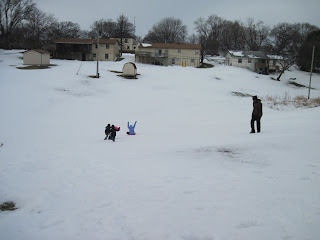 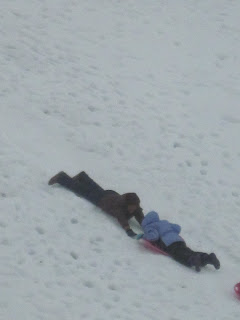 Monday and Tuesday was spent playing in the snow.  There was just enough to make for perfect sledding!  After a few trips down on the saucers, it was packed and slick enough for going down on their stomachs.  I sat on the enclosed, heated sun porch and laughed and laughed at their fun.

Wednesday brought wind and snow - an old fashioned blizzard.  With wind gusts up to 50 mph, we stayed inside and played games. This lasted until Saturday evening when it snowed so hard that we could not see to the next block! 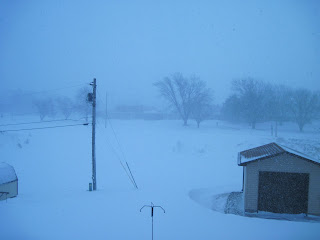 Some favorite gifts were: 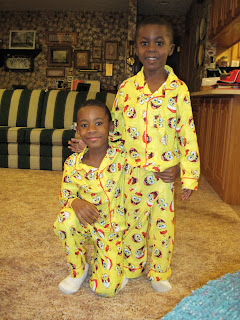 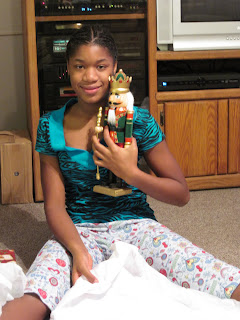 A new Nutcracker for Marquel's collection 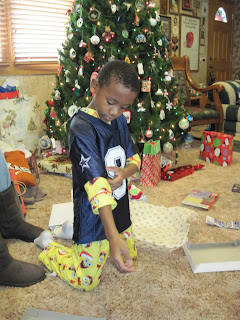 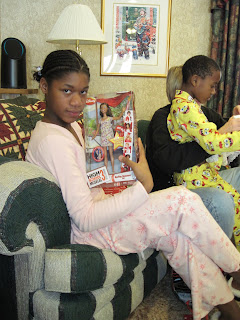 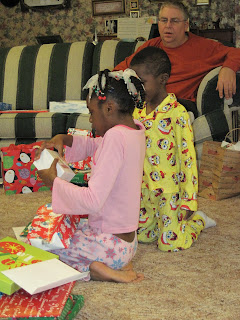 Special ornaments for their Christmas tree Chip would say "oh, that's what I've been looking for!" 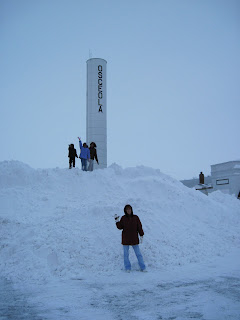 On Sunday we ventured out to see the snow.  The snowplows piled snow in the middle of intersections (that is me at the bottom of the hills and a 2 story building in the right back!)

This is our 3rd Christmas in Nebraska with the kids.  They are finally resigned to "bundling up" before they go outside. 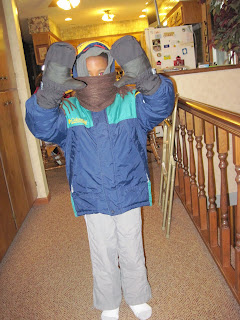 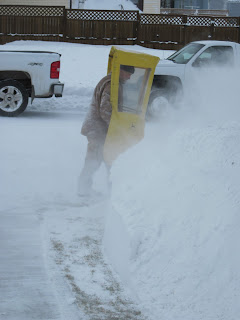 Marquel helped shovel snow for several hours - and loved it.  We don't know how much snow we got from Wednesday through Saturday, but this picture of Bryce and the snowblower give you an idea.  We figured at least 15 inches on top of what they already had!

Randy's sister had the kids working on a surprise project.  All we could figure was that it had something to do with hands, because she asked Randy to take this picture of the kids.  At the school they worked on a really neat calender with pictures made with hand prints for each month.  It is a very special gift that can be re-used from year to year.

So from us and the kids - Thank you so much and Happy New Year! 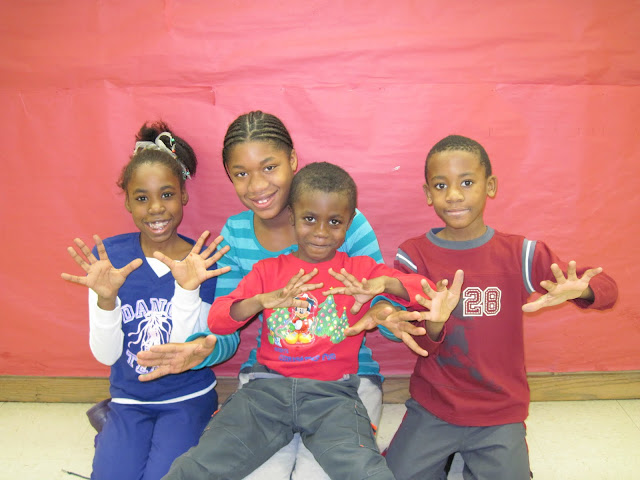 Posted by Stephanie at 3:57 PM No comments:

This year has gone by so fast and this holiday season has been too hectic!  School work, Christmas play practice and Science Fair Projects have occupied the last few weekends.

Marquel's Science Fair Project turned out nice.  She made lollipops and learned about different types of sugar and the chemical composition and interactions that make candy turn hard.  It was due December 15th, which is really bad timing for those of us who have to do these things on weekends, but we managed to get it done.  It seems she came in at 4th place out of her class, so we are really happy for her.

Last Sunday the kids had their Christmas program at church.  Randy and I had tears in our eyes as we watched Chip sing "loud and proud" with his group of little Angels.  Annie and Charlie sang in the kids choir.  This was Annie's chance to sing in church, something she has been begging us to do!  They looked so cute in their new church clothes. 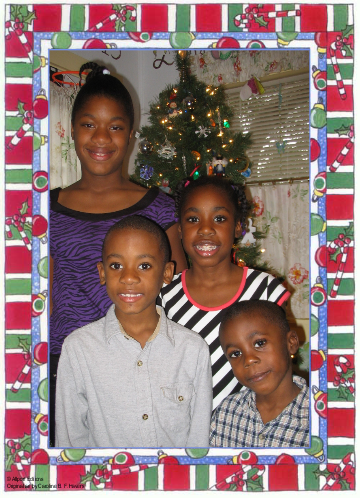 Sharon did an awesome job taking pictures of the play.  You can view them here and more pictures with Santa here.  Even Marquel took her turn on Santa's lap, although she tugged at our hearts when she told Santa she would like her Mom for Christmas.  One day she will understand, and in the meantime she prays every night for God to watch over her mom.

When we see the kids enjoying these things it always makes us think of the condition they were in when we picked them up in New Orleans.  To see them happy and thriving reminds us how thankful we are for your support.

Friday the 18th we leave for our annual trek to Nebraska for Christmas with Randy's family.  A couple weeks ago they got over 10" of snow, so we are looking forward to sledding and snowball fights!

In case we don't have a chance to say it in person,
Merry Christmas and Thank You for all your love and support this year!

Merry Christmas and Happy New Year!
Randy and Stephanie, Turk and the kids
Posted by Stephanie at 5:12 AM 2 comments: 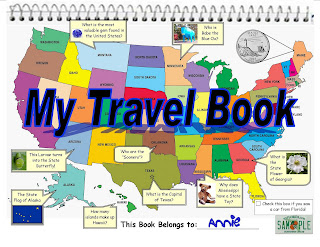 Learn about the United States while playing the license plate game.

Hours of fun for you and your kids.