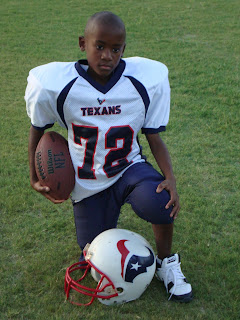 It has been a busy week and we are all tired!  I feel bad when I have to wake Charlie up at 6:00am in order to take his medicine that takes a while to start working.  He has done pretty well in his new school.  We hope it continues.  He makes friends easily and has an awesome teacher.

His first football game is Saturday morning and he has to be there at 7:00am!  He has had 2 scrimmages with other teams this week, and he really got a workout.  He is so good and so fast that he is playing Running Back on the offense and Safety on the defense.  Last night we noticed a little more team spirit, and found out after the game he had been appointed Team Captain.

When Charlie came to live with us in February he was barely eating.  We had a "weigh in" every Monday morning to encourage him to gain.  One week he lost 4 ounces and was very upset that he had eaten some of Mr. Randy's "diet" popcorn.  He was convinced that it made him loose weight.  Over the last month he has gained 3 pounds!  Football has given him an appetite.


Saturday update:  Introducing the new Quarterback!  Randy heard one of the coaches say "We need to get it to the fastest guy as quickly as possible".  I guess that is Charlie!

He did extremely well at his first game.  They did not win the game, but Charlie made several key plays, both running the ball and chasing the opponent down to tackle him.  He played the whole game, offense and defense without a break.

We are getting into a comfortable routine now with Charlie.  His brother and sisters are not at our house this weekend (long story), and while he misses seeing them, we had a really nice day with him.  When he laughs his hearty, genuine laugh he is the cutest thing.  It is beginning to feel like he is truly ours and I can't imagine him not being here.

Marquel joined her 7th grade basketball team at ML King Academy in San Antonio.  She is very good.  At her first scrimmage with another school she scored 6 of the 18 points for her team.  We had to insist that she be allowed to play (practice is until 5:30 every school day).  She is good and it is a good thing for her to be involved in for many reasons.

Chip and Annie are doing great as well.  Annie gets lots of praise for stepping up to do chores around the house that used to be Marquel's responsibility.  She is a master escape artist when it comes to chores!  Chip is just cute and happy most of the time.

Thanks to all of you, this is possible for these kids.

Until next time . . .
Stephanie
Posted by Stephanie at 5:06 PM No comments: 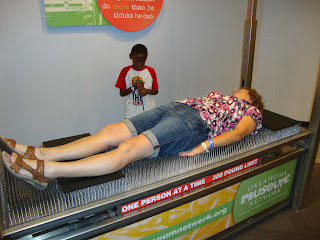 Randy's sister came to visit in June and Charlie went back to Nebraska with her for about 3 weeks.  Charlie was a little confused that there was no snow in Nebraska, where had it all gone since Christmas?!  He got to fly on a plane, go to the zoo, go swimming almost every day, and get lots of spoiling.

We met them in Oklahoma City for a cousins reunion and to bring Charlie home.  He thoroughly enjoyed an afternoon at the Science Museum.  He was a little annoyed that his vacation was over and was probably quite happy to get me on this Bed of Nails!

While we were out of town, Marquel spent a long weekend with friends from church so that she could attend a Volleyball clinic.

The last weekend of July was another cousins reunion, this time in Nebraska.  We took Charlie and Annie.  They are seasoned travelers now, and do fine on the long trips if they have enough movies, electronic games and most importantly - snacks. 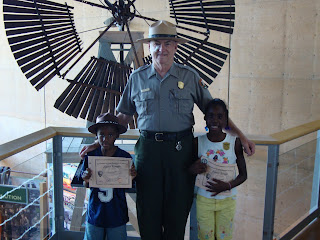 We left for Nebraska late in the afternoon, when Charlie's medicine is wearing off and his appetite returning.  He and Annie ate until all the sandwiches and snacks were gone!  At this point Annie always goes into panic mode worrying about what snacks we will have for the ride home.  I don't know if she will ever get over the fear that there may not be enough food, and always likes to know there is more waiting when she needs it. 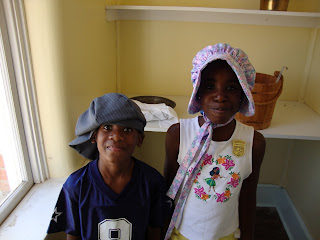 Annie and Charlie made friends with new "cousins" in their new extended family.  Randy's great grandfather homesteaded in Nebraska, so we took the kids to theHomestead Museum where they learned about pioneer life and earned their Junior Ranger certificate. 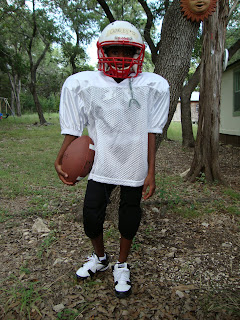 Charlie started football practice.  We felt this would be a therapeutic thing for him to learn to be a good teammate, learning respect for coaches and other kids, in addition to good exercise.  He seems to be a natural at it, and was assigned the Running Back position since he is so quick and agile.

I can't believe it is already August and time to think about getting ready for school again!  Time to try on all the school uniforms from last year to see what still fits and shop for new uniforms and a good pair of school shoes for each.  There are organizations that provide free "gently used" uniforms, however the rigmarole required to apply, the hours required and the miles driven did not prove very profitable.

A huge Thank You to Community in Schools for helping out with the school supplies again this year.  Please consider donating a few school supplies to this organization!  They have been a tremendous help to us and the kids over the last 5 years.

And a big Thank You for cash donations to help pay for the uniforms and shoes- you know who you are!

Until next time. . .
Stephanie
Posted by Stephanie at 7:28 AM No comments: 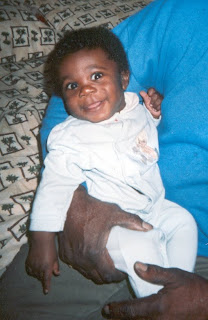 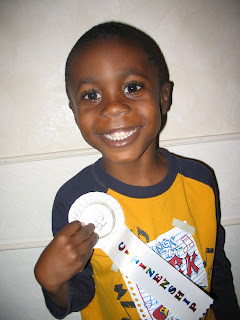 When Chip turned 5 years old on July 24th, it reminded us that the 5th anniversary of the storm was approaching.  Chip was only 4 weeks old when Katrina turned their world upside down.

It has been great fun to watch him grow.  He is always smiling, singing and dancing.  I called him "Gumby" one day because he can move his body in any direction ~ but the kids don't know who Gumby is!


I hear some of the news channels advertising specials for the 5th Anniversary of Hurricane Katrina.  I am sure they will focus on positive; how New Orleans has rebounded to it's former vibrant life.

Lives have been changed forever, for better or for worse.  The experts say that Post Traumatic Stress never goes away, it only lays dormant and resurfaces at unexpected times.  For those who have not been able to return to their homes, life has had to start over in every way imaginable.

For Mr. Thornton it meant not only the loss of everything he owned, but also the loss of his income.  At the age of now 72, his income is minimal Social Security and SSI (Social Security Disability) due to an injury he sustained several years before Katrina.   SSI is a catch 22 for some people.  It provides a small amount of cash, but it does qualify him for Medicaid which combined with Medicare means that his medical bills are all paid for the most part.  It also pays him a small amount (less then $100 total each month) in benefits for the kids.  But, it denies him the right to hold any kind of job, even one that he could do with his disability.

When Mrs. Thornton left and subsequently asked him to take care of her kids, he knew he did not have the income to take care of them.  Rent alone would take most of his SS and SSI checks, and he did not qualify for any rental assistance.  Then there is food and clothes and necessities for himself and four growing kids.

Because Mr. Thornton was willing to take in his wife's kids and because we knew his financial situation, we told him we would help in any way possible, although we had no idea how we would find a way.  We applied to every possible agency, but he did not qualify for one reason or another.  The only option he might have would be to give up his SSI and find a job.  Putting pen to paper quickly demonstrated how futile that option would be.

If he gave up the SSI, he would lose Medicaid and food stamps for himself and the kids.  Medical expenses for 4 kids who have various health and emotional problems is a huge benefit alone.  Food stamps certainly help, although it is not really enough to feed four growing kids.  Then there would be the cost of day care if he had to work while the kids were not in school.  It would take a great paying job with good health insurance benefits to offset what he would lose.

Considering for a moment that he could find such a job, who would be willing to watch these four kids with emotional and developmental problems.  Having worked around day care providers, I knew that they would not do well in that situation and it would be an on-going problem to find someone to watch them.  He and the kids would be much better off with him at home to help them overcome these problems.

When we agreed to help him in any way that we could, we knew this would be a long term project.  Mr. Thornton will be 85 years old when Chip graduates from high school.  We have seen the toll that the stress has taken on him over the last 5 years.  We hope and pray that he will be around to see these kids grow up.

We would hate to see Marquel forced into a position of supporting or even supplementing the household income as she gets into high school.  We realize that worse things have happened to kids, but don't we really want her to be able to go to college and have a career that will give her the prospect of a bright future without the burden of being mother and income earner for the family?

As this anniversary of Katrina comes and goes, my fear is that those who still struggle will be forgotten.  Mr. Thornton has been able to care for these kids and give them a good home due to the generosity of so many of you.  If it were not for all of you, where would he go?  He could probably fend for himself, but what about the kids, where would they be?

I wish I could remember who it was, someone who had come from a very poor background and made a good life for himself, said "it is great to tell people they should pull themselves up by their bootstraps - but first they must have a pair of boots".

You are providing the boots.

Thank you to each and every one for all you do!

Stephanie
Posted by Stephanie at 6:47 AM No comments: