Occasionally there is a really big Red-Letter kind of day!

A few weeks ago Randy had business in Houston, so Randy's sister and I took advantage of the opportunity to take Charlie to NASA Space Center.  Charlie was elated to have Miss Debbie visiting, and to be able to spend the night at a hotel with a pool!  And oh yes, Miss Debbie took him to a real live baseball game because her favorite team, the Cardinals was playing.

The Space Center was awesome, with games and rides and tours and movies and a museum.  Some of the games utilized little Nerf type balls and they were scattered around outside some of the game areas.  Charlie picked one up and carried it around for a while - but I did not realize until we got home that it came home with us.

I was tempted to think "it is just a little ball", but it was not right for him to take it, after all.  So we sat down and Charlie wrote a letter apologizing for taking the ball and we mailed it back (oh yes, the postage had to come out of his little cup of change that he earns for doing chores).

A week or so later Charlie got a letter from the Space Center thanking him for returning the ball.  It was very nice that they took the time to thank him for doing the right thing.  I hoped Charlie got the message.

Today there was a package in the mailbox addressed to "Charles and Family".  Inside was a very nice letter and a book.  The letter was from a David Cisco and the book he wrote titled  "Full Circle".  (Click on the book title to visit his website).  The letter commended Charlie for his honesty, admonished him to always listen to his mom, and invited him to come visit the Space Center again as his guest!

Randy pointed out that Mr. Cisco's email address was at the bottom of the letter and suggested that Charlie could email him a thank you note.  "His phone number is here too - I'm going to call him!"  and Charlie was off to find the phone.  He left a nice message (he's learning!) and no more than hit the Off button on the phone than it rang.  Mr. Cisco had called him back!

We will begin reading the book tonight - - especially the story Mr. Cisco pointed out and highlighted about a similar incident when he was a young boy.  From a quick glance through the book, I think it will be a great book to read to Charlie.  It seems Mr. Cisco worked very hard to overcome adversities in his life, and maybe it will encourage Charlie to work hard as well.

Charlie will now be proud to tell his friends he has a new friend who is a real live astronaut!  Think he will remember this little lesson? 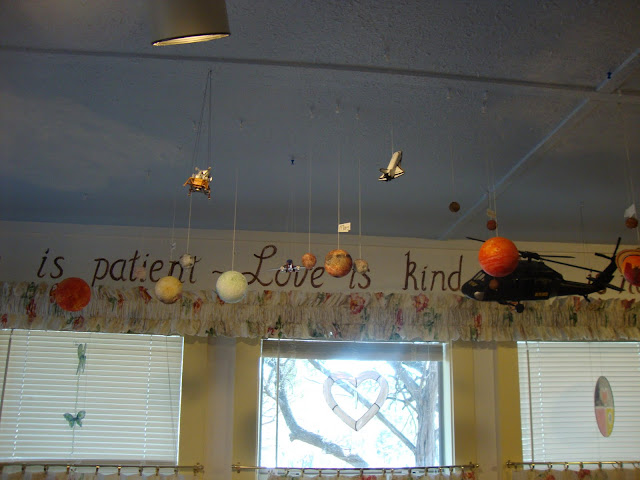 Photo:  Some of the planets Charlie and I made for science project - note the shuttle and space module!
Until next time. . .
Stephanie
Posted by Stephanie at 4:50 AM No comments:

It has been a while since I posted.  The last year has been difficult and it is hard to write when the mind and heart can't get together.  With the help of dear friends and family, we have been able to see more clearly, once again proving that this mission is not ours alone, but takes the love and support of many.

As we look back over the last 5 years it is easier to see in hindsight things that we did not understand at the time.  Marquel (now 14) had (and still has) a very strong loyalty to her mom.  Although her mom left her in charge of the younger kids often, Marquel wanted a relationship with her mom and vacillated between being disgusted by her mom's behavior and desperately trying to win her love and attention.

This conflict within Marquel caused her to hold me at arm's length and push me away if she felt we were too close, resisting any type of relationship.  As she pushed me further away and became more and more insolent, she resorted to accusing me of being mean and nasty to her, giving her an excuse to to make the wall between us thicker and stronger.  By the time she turned 13 we had no relationship to hold us together through her turbulent times.

Annie suffers a great deal due to the neglect and abuse from her mom.  She looks to Marquel as the mother figure, which makes it difficult for her to have a good relationship with me.  Her desire for affection is often expressed in inappropriate ways and her social skills are severely lacking.

When the kids mom took them back to New Orleans and subsequently asked us to come get them, we promised Turk we would help him in any way that we could.  Initially their household was in huge turmoil as they struggled to build a family together.  We began taking the kids to counseling in the hopes that they could come to terms with their new life and learn to live together as a happy family.  The girls seem to have bonded with Turk, and that was our goal.  Now we have to find the strength to give them space so that they can build a strong family unit.

We miss the girls a lot, they filled the house with their laughter as they played.

Randy and I have often been asked if the girls resent the fact that we "chose" Charlie to live with us.  This is not what transpired.  At a time when the girls were pushing us away, we saw Charlie floundering.  He was made the scapegoat from all sides.  His ADHD made it hard for him to control himself, and he was striking out, which caused more trouble.  Marquel, as the "mom" in the home, found herself unable to control him, and often resorted to malicious tactics.  We saw a little boy with so much potential, but at a point where he was going down the wrong path that would lead to a miserable future, and a house in chaos.  While the girls held us at arms length, Charlie was willing to let us be surrogate parents.

When we approached Turk with the idea of Charlie coming to live with us, he did not resist.  He knew that he could not deal with Charlie, and we knew that he had no understanding of the ADHD or the problems resulting from the neglect, abandonment and abuse from his mom.

The first few months with Charlie were extremely difficult, but he did far better in school that we anticipated.  Over the past few weeks of summer vacation we have heard him laugh in a genuine way.  While he misses his siblings, he does not want to go back there to live.  He is figuring out ways to play by himself, which is good for him, and he is smart enough and has the desire to learn to live in a way that won't cause him to be in constant trouble.  He is developing a sense of humor and we have lots of laughs together.

The hardest part of letting go of the girls is the realization that we may not be allowed to see Chip as often as we see the girls manipulate this into our rejection of them.  The cultural divide has become deeper and more apparent and it breaks our heart that they will not allow us to give them so much of what the world has to offer.  We hope that we have been able to give them at least a small foundation to build on, and that as they mature, they will realize we had their best interest at heart.

As we are allowed access to the girls, I will keep you updated as time goes on, but I hope this will help you understand why it may seem a little slanted towards Charlie and his accomplishments.  Here is what we know. . .

Marquel has finished 7th grade and was on the A-B Honor Roll, received awards for her involvement in sports, and really enjoys school.  We enrolled her in the Big Brother-Big Sister program, and she now has a new friend, someone who will be impartial and hopefully be a good role model for her.

Annie really struggled in school this year, but due to restrictive Texas laws, we probably won't be able to get her any additional help. We are trying to get the school to step up and provide her with the extra help she needs.

Chip is a smart little cookie, and as cute as can be.  We see some of the same characteristics that lead up to Charlie's ADHD diagnosis, but we hope that with maturity he will either outgrow or overcome these behavior problems.

We can see the toll that the death of Turk's son, Randy (age 26) has had on him.  He seems to have aged a lot over the past month.  Please keep him in your prayers that he will be able to stay healthy enough to take care of these kids.  Without him, they would be living on the streets of New Orleans with their mom, and then what chance would they have.

As one very wise friend said, "we can only do the best we can and then we have to let God do the rest".  Thank you Janet for the wisdom!