Today my Google Alert directed me to an article in the Washington Post titled For Katrina Evacuees, A Chance to Be Heard (click on underlined to read the article).

I was interested in reading both the article, and in particular, the comments left by readers. Articles such as this tend to bring out a lot of passion in the readers.

I feel so fortunate to have met Mr. Thornton, his friends and family. By knowing him, I am able to understand the after-effects of Hurricane Katrina much more clearly.

After reading some of the above referenced comments, I have a few comments of my own:

1) Meeting so many of the Hurricane Katrina evacuees, through Mr. Thornton and while sitting at various agencies, I have come to understand that the vast majority of them want a hand-up not a hand-out. All they desire is a way to start over and survive in a new and often hostile environment.

2) For those of us who live in a very mobile society, it may be hard to comprehend the community that was New Orleans. Families lived there for generations. Parents, grandparents, aunts, uncles, cousins and children all lived within a relatively short distance. This support system is incredibly powerful, comforting and supportive. All this was pulled from under their feet.

The loss of home and belongings is nothing in comparison to the loss of a support system. This disaster cannot be compared to other storms or hurricanes, or even other parts of the Gulf Coast that were affected by Katrina and Rita, in that many of these people cannot return to their homes to re-establish their life. In Mr. Thornton's case, his rental home in New Orleans is now being rented for several times what he paid. His family and friends are scattered across the country, and his job is gone.

Finding a new job was not feasible for Mr. Thornton. At the age of 70 and disabled, the laws work directly against him. We have searched to find any angle that would allow him to have an income, but to no avail. This is not his fault. There are loopholes for those who want to find them, and there are cracks in the system that is meant to be a safety net. Mr. Thrornton falls into those cracks.

3) Prejudice is alive and well. We see the looks, hear the comments and feel the attitudes. It comes from individuals, agencies, government, and prospective employers. At times I wonder how people like Mr. Thornton hold their heads up high and make a good life for themselves, in spite of the constant thumping over the head in an effort to push them back down. I have huge respect for him and so many others we have met.

4) Post Traumatic Stress is not something you just "get over". While we see the effects on his mind and health, we cannot comprehend the depth of the trauma. Sleep is difficult when every time he closes his eyes, the events play over and over like a horrifying movie. Lack of sleep leads to a host of other problems, on top of frustrations of starting a new life with nothing.

5) There were some who took advantage of the system. This is NOT true of every one! What is true is this: There are those who know how to rip off the system and will do it again and again - they are in every corner of this country and come with various skin colors.

These are just a few things to think about. There are also the politics of New Orleans, the lack of good schools, the lowest wages in the nation, the destruction of the wetlands and the neglected levies which allowed New Orleans to flood. It is hard to comprehend what this opression must feel like. Looking down our nose at other people is not going to lift them up, it is only going to push them down further.

I feel sorry for people who are quick to criticize as they show no willingness to learn to understand people who come from a different place, culture and way of life. To close our eyes, ears and heart is choosing to remain ignorant of what happens around us every day.

If we say we are Christians, or even comassionate, we will make an effort to understand those around us. Red or blue does not matter, what matters is what is in our heart.

Posted by Stephanie at 12:18 PM No comments: 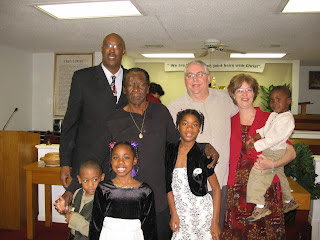 We accepted the position of Guardianship of "our kids" in a ceremony at Temple Missionary Baptist Church.

It was an awesome experience in many ways. Many of our friends joined us in person and in spirit as we vowed to accept this responsbility. Thank you to everyone for your support!

A former pastor had made an unexpected visit, and his message seemed heaven sent. The sermon centered on opening our hearts and minds to what is possible, and that God will give us what we need.

As we considered accepting this assignment, we knew one thing: God has worked very hard to bring these kids into our lives, and keep them here. If He has worked this hard, He must have a very special plan for them, and we must do our part in fulfilling that plan.

We hope that their Father will live a long and healthy life, but we also have to face the reality of his age and the detrimental effects that the trauma has had on his health. Seeing first hand the symptoms of Post Traumatic Stress is an eye-opening experience.

We thank everyone for their prayers and best wishes. We could not do this without each and every one of you!

Stephanie
Posted by Stephanie at 12:26 PM No comments: