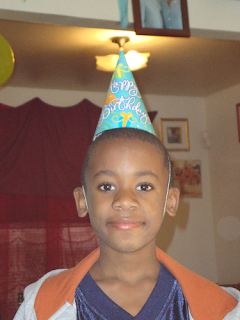 January 15th was Charlie's 8th birthday.  His father had a party for him at their house.

Birthdays always remind us of the first time we met the kids.  Charlie was 3 years old and so traumatized he was unable to talk.  He ran and ran and ran, seemingly trying to run off his trauma.  As the days progressed he found his voice, but it was in the form of argueing with his sister, along with kicking and hitting.

Over the last 5 years we have begun to peel back the layers.  The trauma of the hurricane was only the top layer.  The traumas of abuse, neglect and abandonment by his mom are the bigger and deeper problems for Charlie.

We can look back and see how far he has come, and yet realize how far he has to go.  He will likely spend the rest of his life learning to overcome and cope.  He is amazingly smart, sometimes much older than his 8 years, and sometimes more like a toddler.  Every week we take the kids to counseling, a long trip and hours of time, but we feel we must do everything we can to help them. 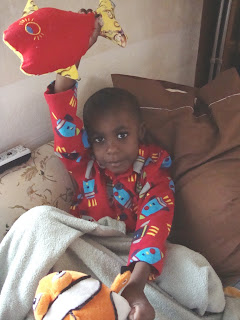 February 4th was a big day for Chip.  After 4 years of constant sinus infections we finally talked his doctor into a referral to a ENT specialist and he finally had his tonsils and adenoids removed.  Randy dropped Chip and I off at the hospital at 6:30 that morning, then went to get Turk and get the other kids off to school.  As we waited, Chip asked me several times, "Can we go home now?"  He entertained the other kids and parents waiting their turn by singing and dancing in his little hospital gown.

The doctor advised keeping Chip inside for at least a week, so he came home with us following his surgery.  He was a very good little patient.  He refused jello, ice cream and popsicles, wanting soft toast and cereal instead.  After a couple of days of refusing to eat or drink, we coaxed him with dimes for his cup.  Finally the threat of having to go back to the hospital if he did not drink some water did the trick.  We hope the sinus infections are a thing of the past, and we are sure he will feel better than he ever has.

A while back we tried a new gimic to encourage the kids with good grammer and manners by giving them a dime for their cup.  At the end of the month they can spend what they have earned.  Having money to spend is a big deal to the kids, so this gives them the opportunity to earn it while we try to help them learn good habits.  Each time they add a dime to their cup they have to recount how many they have.  Even if they have only a dollar or two at the end of the month, they have fun picking out some little toy at the dollar store.

With achievement test time approaching, we are spending every weekend with Annie working on Math.  Annie loves to read and learn, but somewhere there is a disconnect with Math problems, and it is now our challenge to figure out how to help her learn.  I'm not sure what we can do that her 2 math tutors at school can't do, but we keep working on it!

Marquel's counselor transferred to another position, so we have been forced to make the decision of finding a good counselor for her or give up on counseling.  Not willing to give up, we think we have found a great new counselor, but it will be self pay.  Do we give her the best we can, or search for another counselor who accepts Medicaid?  We chose to give her the best we could.  At the age of 12, we feel we are running out of time to make a big difference for her in her ability to cope with her disrupted life.  A new counselor will mean another trip into town and hours on the road, but how much is this precious girl worth?

Once again we are so thankful for all of you willing to give us financial support for the kids and what they need.  We have been given a mission and to do less than we are able is just not acceptable.  If you want to know how you can help with a tax-deductible donation, click here.