The other day Marquel was complaining about what she perceived as bad behaviour and special treatment of her younger brothers. In an attempt to pacify her, Randy said, "Well just remember, in a few years you will be out on your own and you won't have to deal with it."

"I'll be in college," was Marquel's quick reply.

Randy and I were so thrilled to hear her say this. We talk about college as if it is the expected next step after high school, but we weren't sure that they really comprehended the concept. Any cash that they are given goes into their bank, which is their "college fund".

Marquel continued by asking, "How will I get to college?" We assured her that we would make sure she had a way to get there. "But if I have a car, what if I have an accident?" We realized she had given this a lot of thought!

Considering Marquel's latest school progress report shows 90's with one 86, and taking into account that she has the height and physic of a basketball or volleyball player, we are hoping she can maintain her grades, keep out of trouble and qualify for a college scholarship.

New Survery question: While we do last minute cramming and studying with the girls for their TAKS tests (Texas Assessment of Knowledge and Skills), I found some statistics for Texas that were interesting. Let's see how our girls who had such a poor start in school will measure up!

(See below for girls test results)

According to National Center for Children in Poverty, a primary risk factor for low income is the lack of Parental Education. 67% of those who voted in the survey chose this answer. When you think about this, it makes perfect sense:

"The most commonly held stereotypes about poverty are false. Family poverty in the U.S. is typically depicted as a static, entrenched condition, characterized by large numbers of children, chronic unemployment, drugs, violence, and family turmoil. But the realities of poverty and economic hardship are very different. . . About 40 percent of Americans will experience poverty at some point in their lives; only a small minority experience multi-generational poverty and chronic dysfunction." from: National Center for Children in Poverty

Statistics like this make us realize how fragile that line can be and how vulnerable we all are.

Now for the girls Reading test results: A score less than 2100 is not passing. A score 2400 or above is commendable. Both girls scored over 2300!!

According to the Children's Defense Fund statistics, 70% of 4th graders in Texas public schools are reading below grade level!

Posted by Stephanie at 9:24 AM No comments: 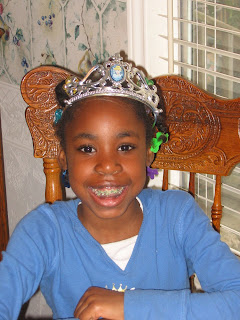 Our neighbors had a garage sale and Annie came home with the most fitting purchase for our little drama queen - a Barbie Princess crown!

She wore it all day every day - along with a big smile.

The fact that it was a little crooked was even more perfect!

It was a great opportunity to learn that if you are a princess you must act like a princess. This seemed to go much further than nagging at her to mind her manners.

She is immensely proud of her braces and her pretty new smile.

School has been more of a struggle this year. We have studied hard on reading comprehension and Math. Her teacher has been outstanding, getting Annie extra tutoring and even doing tutoring herself before and after school.

In the process of trying to help Charlie better with his ADHD, I have been reading a book that the counselors recommended. I think I also found Annie described in that book, realizing that Annie is a very "concrete, black-and-white" thinker. We call her our "Calendar Girl" because she knows everyone's birthday, and loves to keep track of important dates. A calendar is organized nicely into little boxes, but when it comes to more abstract word problems in Math, she has a hard time. Perhaps this will help us find more effective ways to help her learn.

Annie was probably the most influenced by her mom's lifestyle. When her mom partied with her friends, beer and "explicit" songs blaring, Annie loved the drama of it all. Our challenge is to channel her wonderful energy and spirit into more constructive avenues.

We are so pleased when our friends are around and demonstrate the same values. It helps the kids understand that Randy and I are not just mean old fuddy-duds, our friends tell them the same things. And they do listen! We overhear many little conversations and comments that let us know that they take these lessons to heart.

Keep up the good work, and keep us all in your thoughts and prayers.

ps - Remember how hard Marquel struggled in school last year? Her last progress report was all 90's with one 86. Prayer works!
Posted by Stephanie at 4:50 AM 1 comment: